The first year of the research “Class formation and re-urbanization through real estate development at an eastern periphery of global capitalism” (2021-2023) was dedicated to empirical investigations in  8 Romanian cities selected for our study, including regional “magnet cities” (Cluj, Brașov, Iași, Craiova), small municipalities (Reșița, Tg. Jiu, Bârlad) and a new town created in the extension of the capital (Bragadiru).

Belonging to divergent development regions (some recovering from the cyclical crises after 1990, others still affected by the declining trends of all kinds), these localities are in different stages of the transformation of old industrial platforms (privatized and bankrupted) into sites of new real estate development for profit. Leaders in displaying such transformations are the regional cities, followed by Reșița and Bârlad where we could observe recently started real estate projects of this kind, while Tg. Jiu, – even if hosting some new housing complexes -, and Bragadiru – despite its residential estate boom – did not give yet start for the regeneration of industrial areas in this direction.

One may capture the diversity of these cities also by the total number of completed dwellings and the number of building permits issued on their territories. At the same time, as a trans-local (national) rule, as the figure from below shows, we may observe that at least from the second part of the 1990s, a very low number of new homes were constructed from public funds, this phenomenon being part of how the housing market was created after the collapse of socialism. The table and figures below were made by the author based on data taken from Tempo online, a platform of the National Statistical Institute.

Among the small towns, between 1990-2020 the largest number of residential units was built in Tg. Jiu, excepting  2007, 2010, and 2011, when this position was overtaken by Bârlad. The Bragadiru case (responding mostly to the housing needs of people from Bucharest) is exceptional: here a real estate boom started before the previous crisis, the capacity of new housing construction calmed down between 2010-2014, and then exploded again after 2015, exceeding in this matter, in 2019 and 2020, even the regional city of Craiova. In the category of big municipalities, Cluj-Napoca is the leader from this point of view, being surpassed only a few times during this period by Brașov or Iași.

Regarding the number of building permits, the figure below shows that in the period of time for which we have data, Cluj and Târgu Jiu led the list in the category of their types of cities. In this matter, in each locality, there has been a slow growth since 2002, knowing an increase between 2006-2008, then a reduction, and rising again after 2013, but remaining at about the same local level except for the explosion of the number of construction permits authorized in Cluj-Napoca in 2016. In 2020, compared to the previous year, we observe a reduction in the number of building permits issued in half of our localities (namely in Brașov, Craiova, Iași, and Tg. Jiu). 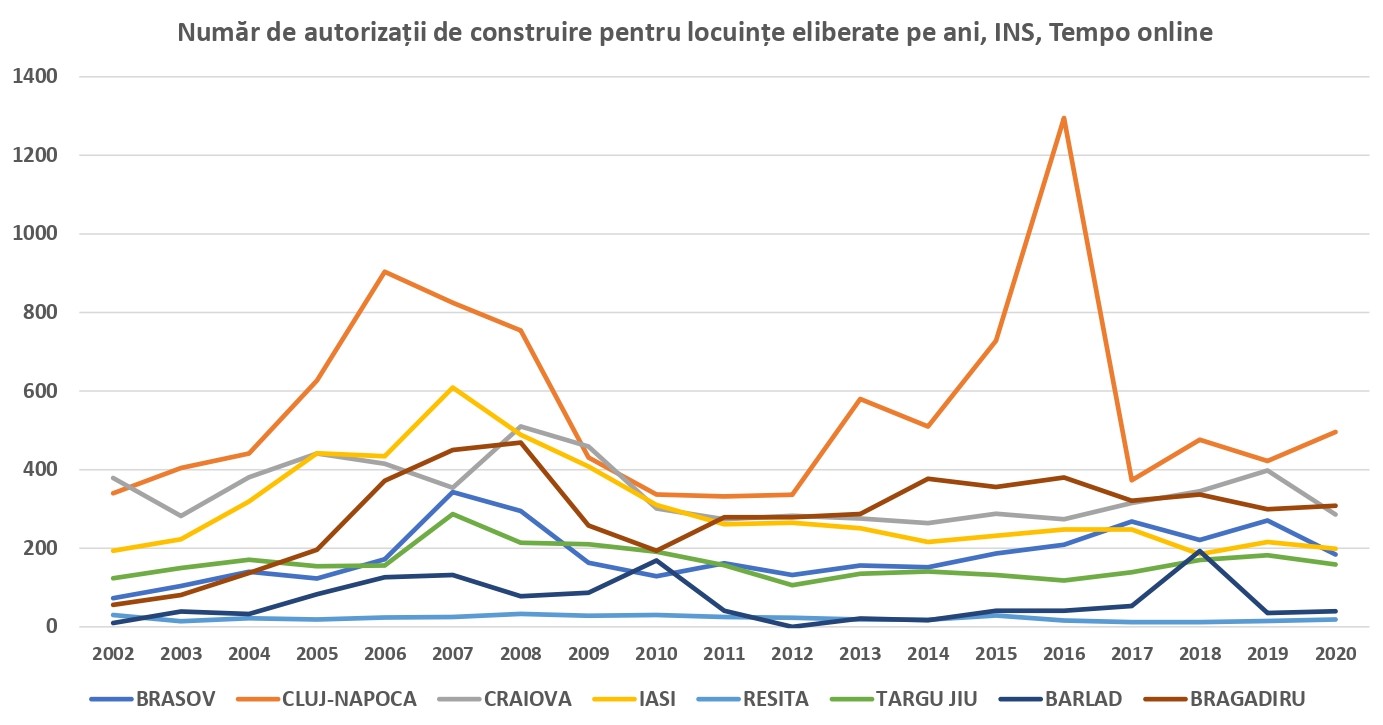 Our project studies the transformation of former industrial platforms into real estate developments as an example of the transition from the primary to the secondary circuit of capital (Harvey) or of the changing capital accumulation regime (Aalbers). We are interested in how this global trend manifests itself in the context of the transformation of state socialism into neoliberal capitalism, as well as how it connects, temporally and spatially, from this point of view, the local to the global, but also the construction industry (as a sector of the productive economy) to the regime in which profit is extracted from the financialization of the built environment.

In 2021, in every city, we could still see the ruins of socialist industries, but everywhere one could also observe signs of capital accumulation from the remnants of the old regime: the more attractive the city becomes for real estate actors or the closer it is to a shortage of lands, the stronger it is the use of the local industrial heritage for real estate development.

This form of accumulation by dispossession is justified by the discourse of “urban regeneration”. After 30 years of deindustrialization, only a few platforms produce anything similar to the goods produced before 1990 (but, of course, only to a very limited degree); in some cases, the old production halls bring profit to the new owners by renting them to a multitude of small companies active in other fields; many factories still exist at various stages of a post-scrap or in a “post-war” state, as the locals say; but – depending on the real estate effervescence in the city – some have already been demolished or restructured, their spaces being occupied by blocks of flats, shopping malls or office buildings made by real estate businessmen. The public authorities of the towns underdeveloped in terms of real estate aspire to the “magnetism” of the big cities, while – to varying degrees – the latter combine their entrepreneurial governance of attracting (real estate) investors with rhetoric that suggests they are trying to counterbalance the pressure from the developers or that they want an “urban regeneration” at least a little greener, all under the conditions of the predominance of privatized urban planning.

In any case, it is clear that real estate development is a strong factor of the current re-urbanization all over the world, and in Romania, it is both a product of the dismantling of state socialism and an engine of financialized capitalism. Our research aims to describe this phenomenon, but also the political and economic conditions that made possible its appearance, and as well as its spatial, economic, and social effects.

The red thread of our interviews is that of questioning the role of real estate development in other processes of contemporary capitalist political economy, such as the spatial transformation of the city (urban planning, reconfiguration of city districts, use of old industrial heritage, territorial discrepancies, mobility issues); business environment involved in real estate development (real estate developers, real estate agencies, architectural firms, construction companies, banks); social transformation of the city (population change, new socio-spatial inequalities); the city’s economy (real estate development intertwined with other private investments, its contribution to the local economy); the attractiveness of the city towards and its competition with other cities (what it consists of, how it is created, what effects it has). These interviews are to be analyzed in the coming months, their processing was not an objective pursued in this phase of research.